Running too many initiatives simultaneously may be counter-productive.

It is not uncommon for companies to have multiple improvement initiatives/transformation programs underway at the same time. In fact, this is considered a good sign. It shows that these companies are forward-looking and raring to grow. But these progressive initiatives might not be telling the whole story of whether the companies are truly poised for growth.

Scratch the surface and you might find that key people in the company spend their days running from meeting to meeting catching up on the progress of each of these initiatives. When not in meetings, they are preparing for one on yet another initiative. Their bandwidth is used up by reviews, leaving little time for “actual work”.

Each initiative brings along an entourage of mentors – consultants, academicians, IT experts, motivational speakers and so on. Each, daily, take up precious time of the key people in the company. Much data is generated for their discussions. This data is circulated in many formats and presented at multiple platforms. As the men and women juggle the many appointments, emails, presentations, numerous meetings, they might wonder, “Which part of all this really matters to me or would help me?” And that might, eventually, lead to the question, “Why so many transformation programs?”

The top management’s answer could be one of the following.

Sadly, these initiatives running in the companies could be cannibalizing each other, unbeknownst to the people running them. Take the case of what happened in one such company for example.
A company-wide cost reduction program was initiated when it was found that the sales team’s travel allowance was 20% higher than that at their competitor’s. The allowance was slashed by 30% even as inflation was at an all-time high. In a few months, sales took a sudden dip. In response, the company hired a motivational speaker to boost the sales force’s morale. As may be guessed, the speaker’s visits did little for the flagging sales. That’s because the sales team’s significant needs were not being met. No amount of motivation could help. Goes to show that efforts made in multiple directions may not lead to any gain.

In fact, often, the top management is left wondering why not even a single initiative is yielding desired results! That makes them start planning another initiative which can pull them out of this mess. The loop continues. Interestingly, since most companies can’t see this vicious loop, the question of why initiatives don’t deliver expected results remain a puzzle. 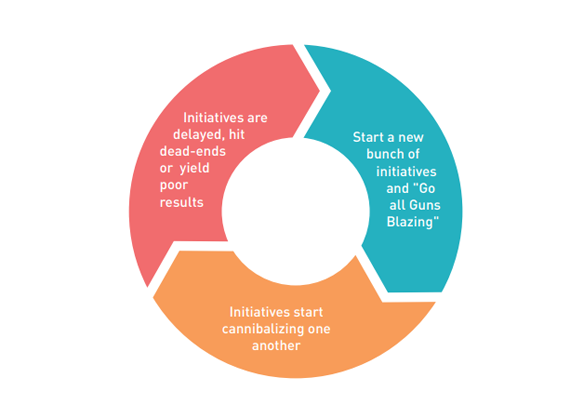 The missing pieces of the puzzle:

An organization, in its simplest form is an interconnected system of functions. When a problem arises, we seek a local solution by seeing the problem in isolation. Traditional management methods try to break a problem into smaller, simpler parts. And then deploy multiple initiatives to solve each of those parts. Simplicity, however, is not about seeing the problem in parts but as a whole– a system approach to solving problems.
When work in one department can impact work in another department, then it is possible that there aren’t multiple problems but a single problem at play. The multitude of problems could be nothing but symptoms of the underlying problem – the root cause! Until this root cause is caught and arrested, the problems (or symptoms) will continue to exist. That is why in spite of companies deploying multiple initiatives to address these symptoms, they find either that these initiatives don’t yield results, or the problems resurface after some time.

Any organization can run only so many improvement initiatives at a time. Similar to “Risk Appetite”, organizations have “Transformation Appetite”, which is the quantum of transformational Initiatives that a company can not only manage but also sustain. Sustained transformations are those wherein the new way of working becomes a habit; becomes second nature and get ingrained in the DNA of the company.
Considering these two facets of systems thinking and transformation appetite, it would make sense to have as few initiatives as possible, and to focus on the root cause.

“A chain is only as strong as its weakest link,” goes a popular saying. An initiative can be strong–followed in true spirit and be sustainable – provided that every individual in the company believes and follows the SOPs in true spirit. This is not always the case. As these initiatives are often driven by the top management, they may not be followed with the right rigor by the people lower in the hierarchy. This is because companies do not invest in educating and obtaining the buy-in of all its employees. That is why few companies enjoy success even after adopting Lean, Six Sigma or TOC 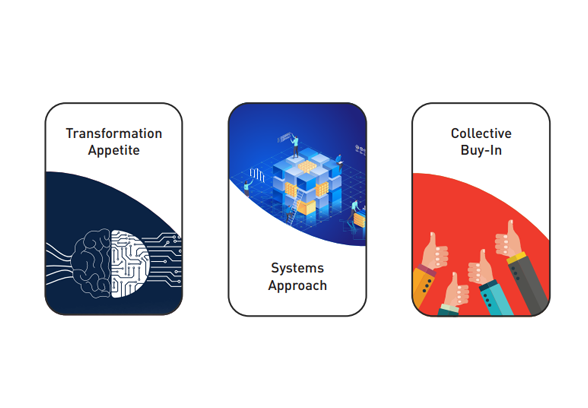 So, until we connect the pieces of this puzzle, the problem of poor results of initiatives can never be solved. What would help is a structured step-by-step approach in “inducting” a transformative process into the organization.

It is very important to prioritize transformational programs -not only in terms which ones are more important but also in the sequence in which implementation should be done. As a company it makes sense to “focus” on one initiative at any point of time to bring that initiative to fruition. By “focus”, we mean that the company may have to let go of various other potential initiatives under consideration or do them later.

To decide on which one is the right initiative to focus on, it makes sense to check each initiative and answer the question “What problem are we trying to solve with this?”. Once that is clear, it is also important to assess whether the problem that we are trying to solve is addressing a root cause or a symptom? If it is not addressing the root cause, we will be wasting our efforts by merely trying to address the situation at a superficial level. Always prioritize initiatives that address the root problems first. Other initiatives may be needed to ensure continuous improvements but those will follow.

When an organization decides to take up multiple initiatives, it is necessary to consider whether any action being taken for an initiative is a “Repetitive Action” or whether it is conflicting with one another. Sometimes, a single initiative can require two actions conflicting with each other. In such cases, the situation may deteriorate rather than improve.

Once the initiatives are finalized, and the issues of synchronization are resolved, the organization must channelize its entire attention towards implementing the Transformation Program with full vigor. While doing so, the Top Management must look out for lead indicators to make sure that the actions are giving the desired results.

A Word of Caution

Organizations are driven by various factors to be at the prime of their performance, be it the market share or the share market. The rat race to be at the top forces companies to take desperate measures of starting various initiatives at the same time – with the shimmering hope that the organization would come out on top in no time. Then they are frustrated when the company goes nowhere! Try taking one step at a time and see how soon you get to the top – after all as the proverbial saying goes- “Rome was not built in a day”.

How to make ‘change’ happen?

In companies, there is a plethora of improvement projects deployed in any firm at any given time. But, can there be a situation where the very change that people are trying to implement becomes its own biggest hurdle?

Simple Tactics to Double Team Productivity: The science of getting work done on time